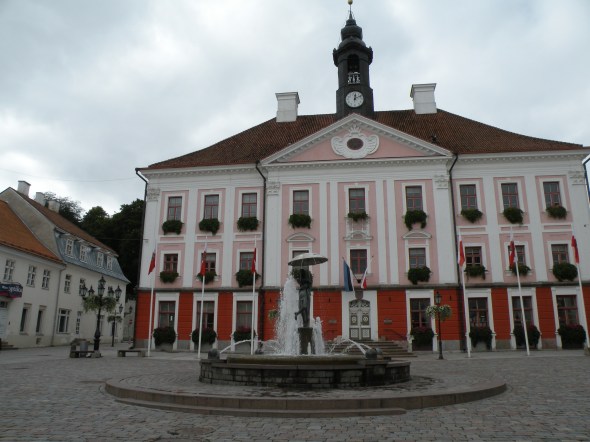 Tartu, Estonia is the storybook-sweet city of 100,000 where I studied all last year. For me at least, part of getting to know a place–and really living there–means trying the local foods (which I’ve talked about before) and the restaurants. Dining out in another country really causes you to confront your own norms and the expectations of another culture. For example, what’s service like in Tartu? Decent, though don’t expect your server to smile, tell you her name and that she’d be happy to seat you. How do they tip? If at all, no more than 10%. What kinds of cuisines are popular? All of them! And even some others I didn’t know I was missing, like Georgian or Balkan cuisines. Once you adjust your expectations you’ll find that it’s all rather easy and it won’t matter if you–like me–speak very little Estonian. It’s true that Estonia doesn’t fall on every traveler’s radar, but Tartu is a fairly cosmopolitan small city, with plenty of international students and international food. I had a great time eating there, so I thought I’d share a few of the places I frequented:

Pierre: Early summer in Tartu was warm and glorious, so I spent many happy hours here on the sunny patio with iced coffees or hot chocolate. Pierre also makes delicious truffles, New York-style cheesecake and buttery croissants. And truly, the cappuccinos here might be the nicest in the city. If you’re up in Tallinn, dying for chocolate, there’s a branch there too.

Werner: This was probably my most-visited café, both by myself and with others. I especially recommend sipping a chai latte upstairs at the tables with white linen tablecloths; fewer people, better lighting, and the servers will leave you alone as long as you like.

Vilde: There’s a café at the base of this building (with a statue of Eduard Vilde and Oscar Wilde, two authors who never actually met but, you know, could have!) which has a pretty porch and makes a decent latte. The restaurant upstairs is even better; try the ravioli or the prosciutto and melon salad, which I hear is very nice.

La Dolce Vita: Even though they got rid of my favourite pizza (the salty-sweet four cheese-honey-walnut), this Italian-owned locale still has a special place in my heart. The house red wine is very decent, and they make a million varieties of enormous pizzas, as well as pasta, gnocchi, and desserts. Come hungry. 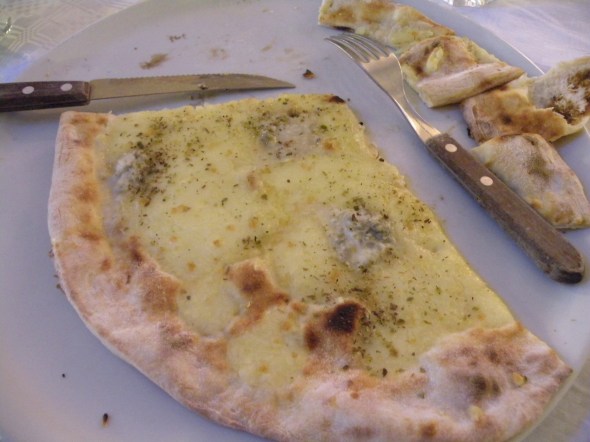 Kung Fu: One of my former flatmates, a girl from Hong Kong, considered this place the most authentic Chinese restaurant in the city. That’s recommendation enough for me! One of the servers is rather surly, but you’ll likely have the place to yourself and you can enjoy some very tasty food. I recommend the Kung Fu eggplant. And when you finish you can just round the corner to Illegaard for a drink.

Tbilisi: OK, the restaurant I really wanted to talk about was Gruusia Saatkond (Georgian Embassy), just up the road, but it appears to have closed. This makes me very sad since one of the waiters actually owned the place with his wife, and it was some of the friendliest service I ever had in Estonia. But Tbilisi is still a nice place to eat (so long as you don’t get the grape pudding for dessert). If you’ve not yet tried Georgian food, get on it! It’s a very flavourful, heavily-spiced cuisine, and perfect for those cold Estonian nights. It was a blissful day when I discovered khachapuri (which is essentially a warm cheese bread) and the roasted eggplant with walnut sauce.

Tsink Plekk Pang: Your all-purpose Asian restaurant in the city! For serious, here you can get sushi, noodles, stir fries, and Indian specialties. I went here first in October when I was dying for some saag paneer; it was freshly made and really delicious. Plus, the restaurant has some lovely low lighting and lots of types of tea.

Ö: This is a bit of a cheat, as the unpronounceable Ö is actually located in Tallinn, but I thought I’d include it anyway. I’m really into their concept of nouveau Estonian food: living off the land (or sea) and using local ingredients, all that good stuff. (Also, their bread was amazing and I talked about it for months after.) I went here for my last birthday and it was one of my nicest dining experiences all year.

That should give an introduction to what I have eaten and loved in Estonia. Happy dining!

I spent last year studying in sweet, small Estonia, a country with a lot of hearty food that’ll keep you going through the long, cold winters. In Tartu, the “city of good thoughts,” this generally means lots of potatoes, cheese and bread. But then summer blossoms and the countryside is blessed with berries and rhubarb and men start fishing again by the Emajõgi river. There’s lots more than what I list here, so if you’re interested in learning more about Estonian food, check out Pille’s excellent blog.

Kali: Also known as the Russian kvass, Kali is one of those acquired tastes. It’s made from fermented rye bread and tastes kind of like flat root beer. It’s also the beer substitute of choice for those not yet of legal age because it does contain a (very) small amount of alcohol. I used to know a girl who would come home and down an entire litre of Kali in one sitting.

Kama: Kama is definitely an Estonian thing. It’s a creative flour mixture of rye, wheat, barley and peas (!). It sounds strange, yes, but if you mix a few spoonfuls with kefir, yogurt, or sweet kohupiim (and maybe some jam), you can have yourself a really tasty breakfast.

Kamatahvel: I’m totally into the retro gold and red packaging, but I’ve got to say that this pseudo-chocolate leaves me cold. It tastes a little waxy to me, but then of course I wasn’t weaned on it like many Estonians I know. As legend has it, during the Soviet era there was a shortage of cocoa powder in Estonia, so one cheeky Kalev worker tried replacing some of it with kama. It seemed to work, and Estonians were kept happy with their choco-flour treat. After the fall of the Soviet union Kalev stopped producing Kama chocolate, but it was reissued ten years later under the new Kamatahvel name. A classic was born. 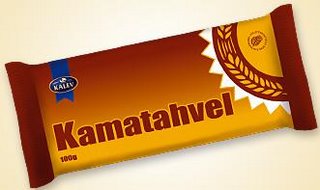 Blood Sausage: I can’t leave this one out, because it is to Estonia what apple pie is to America. It’s a beloved Christmas-time special. If you want to learn more, The New York Times wrote an article about it, and I think the opening photo is all you need to see.

Kohuke: These are like the Russian sirok bars, but I’ve also seen versions in Hungary, so maybe they’re fairly common. In any case, they are awesome, cheap, and make for a delicious breakfast. They’re like a mixture of sweet ricotta cheese covered in chocolate glaze, then chilled. They come in plenty of flavours like coconut and caramel, but my favourite is classic vanilla.

Vana Tallinn: This is liquor, and not technically a food, but Vana Tallinn has the syrupy-sweet consistency of Jägermeister. I suggest mixing with milk or coffee. Be warned: a single glass will do.

Cloudberry Jam: Berries of all sorts herald spring in Estonia, so they seem to stir up a lot of joy. (Note: there’s even a nightclub in Tartu called Maasikas: Strawberry!). These orange pillowy cloudberries (seen above) look so pretty growing in the countryside, and they make for a really interesting jam; it has this mellow, seedy, Nordic flavour that I’d never tried before.

I’m going to follow this up soon with my guide to food shops and restaurants in Tartu. Until then, if you want more Estonia, Justin Petrone (author of My Estonia) writes a lovely blog, too. Enjoy!